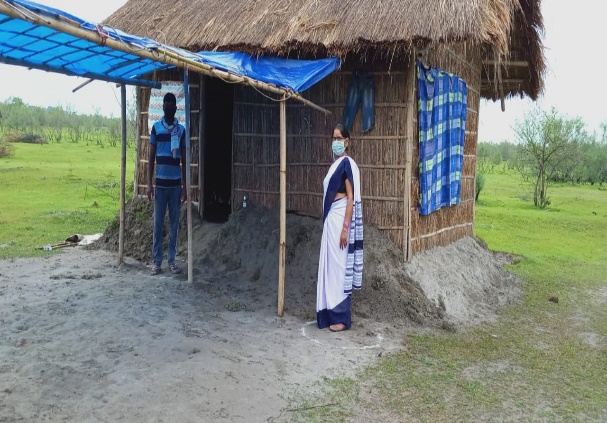 The Boat Clinics of Assam operated by the Centre for North East Studies & Policy Research (C-NES) in partnership and support of NHM, Government of Assam, also stepped up their efforts in combating and containing the spread of COVID-19 in the far-flung, difficult to reach river islands of the Brahmaputra, most of which lack access to basic facilities.

In normal circumstances each Boat Clinic team comprising of one District Program Officer, two Doctors, two/three Nurses, one Pharmacist, one Lab.Technician, three Community workers and four Boat crew would regularly visits the targeted island villages and provide immunisation to children, pregnant women as well as treat vulnerable adult groups and generate awareness on family planning and other health topics. The 15 Boat Clinic units, would carry out general check-ups for all kinds of symptoms, test for malaria and other vector-borne diseases and ensure early detection of communicable diseases as well as non-communicable diseases like diabetes, hypertension etc. But for these units the modus operandi from March 2020 onward was different. COVID-19 was an unknown virus and fear and anxiety was looming large within the Boat Clinic team members. The program management unit (PMU) had to step in to build confidence in the minds of each individual frontline worker through a video conference call along with the Managing Trustee, Technical Advisory members and the 15 Boat Clinic units’ staff. In the VC encouragement and confidence was built to take on the invisible subject. The PMU decided to develop an SOP for all staff and units to follow strictly. These instructions included regular sanitization of the boat, the instruments and equipment’s including the registers and files, furniture, before and after every health camps, maintain proper and regular hand washing and wearing mask and hand gloves, maintaining physical distancing at all times, using the elbow while coughing or sneezing, disinfecting the apron etc and other steps to follow while organizing camps and visiting homes in the villages and so on.

World over the frontline workers have been applauded for their work and regarded as warriors battling the war against the virus. The 15 Boat Clinic unit teams also started their mission with dedication and commitment to reach out to the river islands villages in 13 districts in close coordination with respective District Health Societies. Their first response was to immediately inform and make aware as many people possible about coronavirus and how it can spread, the importance of maintaining social distancing, regular and proper hand washing, need of wearing face mask, first signs/symptoms when health assistance should be sought. Communities were also made to understand that in order to break the chain or contain the infection from spreading, as responsible citizens they should keep themselves locked inside their homes (specially the vulnerable groups like PW, Children below 10 years & elderly people above 65 years) for the number of days announced by the government.  In order to penetrate more and spread the message affectively most Boat Clinic units divided into 2 to 3 teams and reached out to people and homes even in the most interior island villages. A total of 1569 awareness session was conducted till 30th September 2020 while ensuring that physical distancing is maintained by all during the sessions. In the initial period stigmatization due to illiteracy and fake news being spread within the communities was high which also caused a hindrance in approaching villagers. In one or two districts a fake news was spreading fast through social media which informed people that doctors are giving tablets/medicine for the virus which instead of curing will kill the person within 3 months. Another false news was that the quarantine centres were actually detention centres or jails where people are kept for 14 days.

All Boat Clinic units in the initial period (March) apart from the awareness sessions were also engaged in visiting villages and identifying persons with travel history with help from ASHA worker and local leaders. The identified persons were put under home quarantine after proper counselling and awareness was given to all members of his/her family. The ASHA and AWW workers and village headman were made responsible to closely monitor and to inform immediately of any changes in health condition. As many as 1005 person was put under home quarantine and closely monitored with 1475 follow up visits by Boat Clinic team within this period.

After the State Government had opened up its boarders for people of the state to return back from other states by road, railway and air, 723 persons from Boat Clinic areas were accommodated in different Institutional Quarantine Centres till 30th September 2020.

These island villages are mostly dependent on agriculture production and have been greatly affected in the lockdown as for many families their agricultural produce were wasted in the field itself during the 1st and 2nd lockdown period. Though all these hardship were present, the communities were fully cooperative and acted with responsibility in following the instructions and guidelines of the State Government to contain the spread of COVID-19.

In the month of May 2020, 12 Boat Clinic units in 10 districts were engaged in Assam Community Surveillance Program (ACSP) of the State Government and 58,302 persons had been screened for ILI/SARI till 31st May, of which only 18 were detected of having ILI/SARI symptoms. In the 2nd round in June 2020 44,261 persons were screened out of which only 2 were detected for ILI/SARI symptoms by 5 Boat Clinic district units. (Total 1,02,563 ACSP was done)

************
Bongaigaon 9th April 2020: The Circle Officer (CO) Tapattary division of Bonagigaon district was quick to respond in supplying grocery items for people under home quarantine in the Boat Clinic serviced island villages. During follow up visit by the C-NES health team they found that many families under home quarantine had no dry ration and proper food for the past couple of days. Most of them are daily wage income earner and due to the lockdown they could not earn. They expressed their concern to the visiting Boat Clinic team and how they would survive the 14 days quarantine without any food. When this was informed to the Circle Officer with a list of persons under quarantine. Within hours all essential food items including mustard oil, rice and dal were arranged and distributed.

Delivery on a Country Boat:

21st April, 2020, started early, like any normal day for the C-NES Dhemaji Boat Clinic health team in Upper Assam, bordering Arunachal Pradesh, as they prepared for another long day ahead. Times were uncertain and challenging due to the lockdown. As the team proceeded to Pakhoriguri sapori (island village) to conduct a health camp they are stopped by a few villagers. “An emergency” they said. A pregnant 19 year old Silaboti Boro from Udaypur village of Mechaki Sapori, was being brought by her parents in a country boat to the nearest mainland hospital as roads were closed due to the nationwide lockdown. Her husband was far away in Chennai. Silaboti started labour in the boat itself and the family was not able to contact the 108 ambulance service despite frantically trying to. The very sight of the “Doctor’s Boat” from afar was Godsend. The young Lady Medical Officer, Dr Modhusmita Hazarika and ANM Mohima Boro had no time to lose. They had to make a quick decision. There was no way they could take her to the nearest health centre. It would be too late. It had to be here and now on the country boat. The surface was cleaned, necessary hygienic precautions taken. Gloves were put on and the duo swung into action. Exactly 26 minutes later, at 12.26 pm, a healthy baby boy weighing 3 kg was born much to the delight of the family. A baby born on a country boat. The mother and infant was referred to the nearest health centre (MPHC) at Ramdhan for further check ups. The baby is named Somol Boro, the team was informed later. This was not the first instance when a Boat Clinic responded to a call of distress on a remote island.

Shyamjit Pashi, DPO, Morigaon, who is responsible for monitoring population in 28 island villages, said their team started informing people about the guidelines and advisory about COVID-19 before the state-wide lockdown was announced in Assam and therefore people were well aware. “After May 3, we have also started community surveillance as directed by the government. Our team is visiting every household and we are trying to find out people who have fever or have recent travel history. We then screen such people with thermal body scanners. If we find a person whose body temperature is more than 38 degree Celsius, our medical officer decides on collecting the swab and sending it for testing.”

Terming the people in the villages to be very co-operative so far, Pashi said, “They have understood why social distancing is required. 35 people from these Saporis who work outside Assam returned home before lockdown. So, we ensured that they are quarantined in their home.”

Many island dwellers in upper Assam who returned back home from other states have set a unique example of self awareness by quarantining themselves outside the village. Villagers have built bamboo chang ghars (homes on stilts) and sheds made of mats and other natural materials. The returnees have not tested positive but do not want to put in danger the lives of their families and neighbours.

COVID-19 duty on deputation by the District Health Society.

In Lakhimpur district the Boat Clinic unit staffs (Doctors, Nurse, Pharmacist, Laboratory Technician, three Community workers and the District Program Officer was engaged in the Quarantine Center in Lakhimpur Town from 2nd April till 19th April on shift duty basis. Both the Medical Officers continued to work for Quarantine Center (5 Hotels) and in the Banipur Railway Station at Dibrugarh for people returning to the districts from other States of the country till August and then at the district Jail. In Tinsukia the District Program Officer Boat Clinic was engaged by JDHS to assist in COVID-19 duty. In Bongaigaon the health team has been given the responsibility (from May end) to monitor the health status of quarantined persons accommodated in 7 schools in different villages, they were also responsible to monitor and release the quarantined persons from these centers.  Laboratory Technicians from Bongaigaon and four other Boat Clinic districts units were engaged to collect swab from people travelling back from other States by train at the railways station booth and different swab collection centres. Jorhat Laboratory Technician continued till September 2020.

Intensive Awareness on COVID-19 from March’20

Orientation on COVID-19 for ASHA workers by Boat Clinic teams

Awareness on Importance of Hand washing

Identification and stamping of people for home quarantine and providing awareness