Home Programmes The Boat Clinics of the Brahmaputra

The Boat Clinics of the Brahmaputra 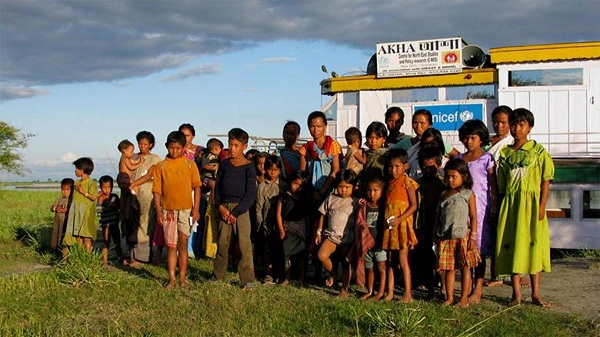 For centuries, the Brahmaputra has swept along its long journey from Tibet to the Bay of Bengal, touching the lives of tens of millions with its enormous power and majesty — physically, culturally and economically.  Every year, millions of people are displaced and extensive property, crops and livestock are destroyed in annual floods in Assam and in downstream Bangladesh. Health problems are acute. Many are affected by water-borne diseases. A major problem is access to medicines and sustained health care.

An extraordinary and unique geographical phenomenon characterizes the river in its 891 km course through Assam: a vast network of islands, home to the most vulnerable.  More than 2.5 million people live on some 2,500 of these islands in Assam- chars or saporisas they are locally called. They are found along the river from the states northern border with Arunachal Pradesh to the south west where the Brahmaputra enters Bangladesh. They represent a significant reality, comprising 8 percent of the total population of the state of 30 million.

Most islands totally lack basic infrastructure and services; from health to schools, from power and roads to drinking water and sanitation. In June 2004-2005, the Centre for North East Studies and Policy Research (C-NES) launched a unique initiative to tackle this unique challenge; to bring better  health facilities to communities in the Brahmaputra valley. A team under the leadership of SanjoyHazarika, Managing Trustee worked round the clock to design and build Akha – described also as “A Ship Of Hope In A Valley Of Flood” – to provide mobile health services to the poor and the marginalized on the islands in Dibrugarh district. The focus: immunization of children, pregnant women and new mothers as well as treatment of vulnerable adult groups. The concept won a World Bank Award for innovation aimed at bridging rural gaps.

It started small in Dibrugarh, in partnership with the district administration. Later, following a similar strategy, it expanded its services to Dhemaji and Tinsukia. UNICEF then came into the picture to build capacity and training. The National Rural Health Mission, Government of Assam, then proposed a collaboration seeing this as a major opportunity to give sustained health care to those millions who have been beyond ‘normal’ reach.  A unique Private Public Partnership was signed on January 2008 with NRHM. The Boat Clinics work in 13 districts of the state — Dibrugarh, Tinsukia, Dhemaji, Jorhat, Lakhimpur, Sonitpur, Morigaon, Kamrup,  Nalbari, Bongaiaon, Barpeta , Bongaigaon and Dhubri. A total of 15 Boat Clinics are operating along the river, Barpeta and Dhubri having an additional unit each to cater to a larger population.  In addition, the project also provides training and awareness on family planning, other aspects of health including the crucial sphere of sanitation. Schools are being established in Dibrugarh and Lakhimpur districts, supported by UNICEF for children of the islands who have either never been to school or dropped out. A Community Radio Station is being established at Dibrugarh with target audiences of tea garden labourers and inhabitants of the islands. It is expected to reach over 2 lakh persons with regular programmes on health, education, nutrition, sanitation as well as interviews with community leaders and cultural programmes reflecting the lives of those it reaches.

The work of the Boat Clinics has led to remarkable results: On an average 18,000 – 20,000 people are treated every month in the districts, individuals who were earlier beyond the reach of government programmes because no doctors or paramedics would go on a regular basis. The only time, villagers say, they would see a doctor on site was during an emergency like a major flood. Otherwise they had to travel long distances at great cost and risk to get treated. Today, the services come virtually to their doorstep, courtesy a network of dedicated and extremely hard working team of medical personnel and organizers who function under arduous conditions:  bad weather, a challenging river and the difficulties of social and geographical exclusion. It has not been easy – but it is now an established programme that has not only found acceptance but extensive support.

An elderly villager from Majuli came to one of the camps and just observed the team’s work. He smiled when Dr Momin asked him if he needed treatment. No, he was fine. Then why did he come? “To see a doctor- I have never seen what a doctor looks like” 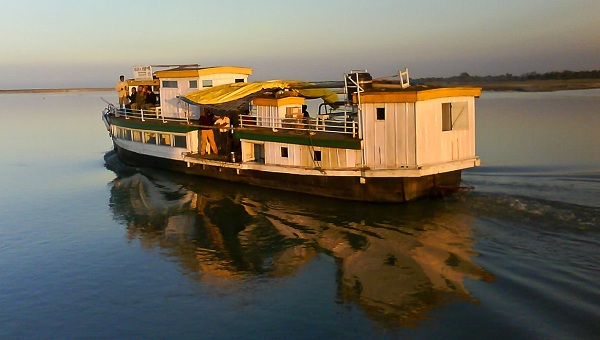 The boat clinics provide services which have been developed under a Memorandum of Agreement with the NRHM, which is fully funding the project, barring the cost of seven ships, which are being financed by private donations and grants. The well-known economic columnist and philanthropist, Swaminathan S Aiyarand his wife Shahnaz have funded boats which are named after members of his family- The vessels are Shahnaz, Rustom and Swaminathan while Pallavi and Shekhar are being completed. The Jorhat Boat Clinic SB Nahar  has been donated by Oil India Limited as part of its Golden Jubilee celebrations. The Sonitpur Boat Clinic SB Numali and the Boat Clinic at Kamrup has been donated by Numaligarh Refinery Limited. The remaining vessels in other districts are hired boats but efforts are on to replace them with boat clinics to be funded by NRHM.

The focus areas include the following:

A series of camps to deliver these services are organized by developing work plans for each district to cover the islands in association with the NRHM,  the Joint Directors of  Health as well as C-NES’ teams of District Programme Officers (DPOs) and Community Workers; the former are the organizing core of the outreach.  The teams make 5-6 trips per month to selected islands and conduct camps for 16 to 20 days. There are two MOs or Medical Officers and paramedical staff includes two ANMs, a GNM, a pharmacist and one laboratory technician.  With the involvement of local communities, the DPOs, hold camps in a series of villages. The camps are announced through ASHAs and village headman and local residents by the DPOs and CWs to ensure extensive participation.

In addition, Medical staff on Boat Clinics has safely delivered 15 babies in different districts at times of emergency

In addition to the NHM, C-NES partners have included UNICEF, which has supported the program in Dibrugarh, enabling it to become more inclusive and structured, especially with the setting up of village health and sanitation committees. UNICEF is also supporting a unique education initiative which brings learning skills to out-of-school children on the saporis of Dibrugarh and Lakhimpur. Training and Technical support is  being provided by UNICEF. A community radio station, Radio Brahmaputra as it is popularly called has also been set up at Dibrugarh with initial support from UNICEF.

C-NES and the New Delhi based Population Foundation of India(PFI) have been working together since 2009 focusing on propagating Family Planning methods,  Reproductive Child Health (RCH) and awareness building on Family Planning amongst the island dwellers .

Beginning of a dream

For every beginning of a transformative process, there is a dream and a dreamer. The dreamer was Sanjoy Hazarika, C-NES’ Managing Trustee and  writer, analyst and documentary maker, who says he was driven by the tragedy he had  seen among island dwelling families who had lost pregnant women or sick children for lack of access.

Such a situation was unacceptable, he felt. “I realized that access is the key to delivering basic services, the simplest and best way to reach those  in need was by the very transport they had used for millennium, boats but better designed and specially equipped vessels carrying   medical teams, medicines and equipment.” he said.

The dream began with the design for Akha winning an award in the World Bank’s India Development Marketplace 2004 competition; judges said it represented a unique innovation that could transform the lives of rural communities. With   funds from that award, the ship took shape at Maijanghat, Dibrugarh, with carpenters from Dholla, Tinsukia districts under the supervision of Kamal Gurung, a local boat builder.

The boat, completed in June 2005, was 22 meters long and over 4 meters wide with an OPD, Laboratory, cabins for medical staff, medicine chest, kitchen, toilets, crew quarters and a general store. Equipped with a generator set and a 200 liter water tank, it is powered by a 120 truck hp engine and now has a solar ice line refrigerator (ILR) as do two other boats. Other vessels designed and built by C-NES have similar facilities.

The initiative marked a people -centric approach to designing, planning and development, especially in rural areas. The focus is on one primary area – health –which could have multiple impacts on other sectors such as education and livelihoods.

The goal to make health care truly inclusive and accessible to millions, especially those on the margins is within reach.

“As a member of the Planning Commission responsible for health, I felt at once elated and deflated: elated because C-NES, working in partnership with the government of Assam, the NRHM and UNICEF, has taken healthcare to the forgotten people of the river islands of Dibrugarh, Dhemaji and Tinsukia districts in Upper Assam. It has reached 10,000 people, including many children who have, finally, been immunised; deflated because the individual genius which experiments and triumphs over adversities is rarely used as a model for upscaling and replication. The government has the resources and the mandate to create a thousand Ships of Hope that will bring health to people who are at the receiving end of a highly volatile and moody river. We need the  humility and the willingness to learn from those who know better.”-

In addition to human health care, veterinarians are also transported to the islands where large cattle populations live, because these habitations are one of the primary centres of milk production in Assam, but, like their owners, the livestock too have no access to health care. This is being expanded. Other elements of this people-based approach include the following:  bringing solar energy to the poorest households, education and mobile technology, enabling people to be connected to each other and to the world, giving them a stake in the market and place in society, coming out of generations of social and geographical isolation. The organization will soon have India’s first Hospital Ship (Floating Hospital) supported by the North Eastern Council, Government of India. On 24th May 2013, the Assam Chief Minister MrTarunGogoi dedicated its services, when complete, to the sustained health care of lakhs of people along the Brahmaputra in Assam and the NER. The ship will provide specialized health care services on the river to island communities, particularly for mothers and children, including safe institutionalized deliveries, as well as conduct operations. There are few such Hospital Ships on river courses in the world.

Today, we can say confidently that the Akha approach has worked. Indeed the process represents a positive export of Best Practices from Assam and the North East, for  far too long characterized by conflicts and misunderstandings.

This is the Akha model: initiatives, innovativeness, motivation, mobilization, training, self-help and sustainability, providing. a platform for change,  giving all a stake in improving their lives, partnering governments  and other agencies but not dependent on them .

Strongly rooted in reality, this process with the strong involvement and cooperation of the NRHM is now sweeping across the Brahmaputra Valley and beyond to help the region grow inclusively, with prosperity, dignity and stability.