Along with reducing the high Maternal Mortality Rate at 328 deaths per 1,00,000 live births against an all India average of 178, a high Infant Mortality Rate at 54 per 1000 above the national average of 40,  reducing the high Total Fertility Rate at  2.4 in the state is an important focus areaof C-NES’ Boat Clinic health initiatives. C-NES and the New Delhi based Population Foundation of India (PFI) have been working together since 2009 focusing on propagating Family Planning methods, Reproductive Child Health (RCH) and awareness building on Family Planning amongst the island dwellers not without the dedication and tireless effort of the team keeping aside the adverse conditions and situations often faced in order to provide the service.

CNES’ collaboration with PFI in five of the thirteen Boat Clinic districts in Assam – Morigaon, Sonitpur. Barpeta I, Bongaigaon and Dhubri II as supported the work and outreach achieved through the ongoing partnership of the innovative boat clinics with the NHM, Government of Assam, by focusing on propagating family planning methods. Awareness campaigns on family planning, promoting reproductive health, preventing early marriage and spacing amongst children are regularly organized. Motivating isolated communities under the influence of superstition and religions which do not encourage family planning is not easy. Among minority groups, family planning is an issue but with the help of doctors and community leaders, this is being directly addressed.

C-NES’ family planning counselors in the PFI-CNES project intervention districts of Assam have motivated beneficiaries with regard to family planning. In all districts, the counselors are actively supported by the community workers and the health team. Involving religious leaders and village heads in the awareness programme for a positive community response has worked. Take the case of Sophiya Begum. Repeated childbirth had made the 35 year old from middle Assam’s Sonitpur’s Bootmari Char severely anemic. She recorded only 5.7% HB. The health team along with the family planning counselor asked her to go for permanent family planning measures and a healthier diet. She was given adequate medication so that she could resume her work at homeand tend to her five children. The next time the team visited, Sophiya was healthier. Her hemoglobin level was up to 9%. She had taken another momentous step: to go in for permanent family planning and undergo laparoscopy. After constant awareness sessions by the health teams, the people are becoming aware of the importance of family planning and have started using different contraceptive methods. Many women show interest in inserting IUCD to prevent unwanted pregnancies. Accordingly the teams organize IUCD insertion camps in the river islands by bringing experts and experienced nurses. The achievement in the family planning program with 1006 LS, 221 IUCD and 15 NSV (till March 2014) speaks for itself.

The positive approach is infectious. At a laparoscopy camp organized by theDistrict Health Society, Barpeta,33 women of the 59 who came were motivated by boat clinic for adoptionof family planning methods. Six of them belonged to Bahir Bhelengi village, the highest on a single day, from any single village till date under boat clinics in the district. What is noteworthy about this is that the team cannot alone claim credit for motivating the beneficiaries-as many as three women were motivated by a beneficiary from the same village who had adopted laparoscopy during September 2013. Shy Jayful Nessa, 27 year old, mother of four when congratulated by the health team on her initiative said that she often talked to her friends about laparoscopy after her decision. She cleared their misconceptions, encouraged them and spoke about health benefit. “I am happy that I could help these women and their husbands decide on something early so that they could lead a healthy and happy married life.”she said to the team. Hunufa and Saimona, both 26 years old with 2 children each and Anna Khatun, 28 years old with 3 children, residents of Bahir Bhelengi char adopted laparoscopy in 2014 at Chenga BPHC. They said that they often talked to Jayful Nessa about her experiences on laparoscopy and she helped them take the crucial decision.

Ourtargeted areas in the work with PFI are inhabited by the religious minority where family planning is not easily accepted -religious beliefs, taboos and customs dominate. Being illiterate and poor, religious and village heads are the decision makers in the community, strong in their age old beliefs and are adamant. This was the major challenge that the district Family Planning counsellor (FPCs) had to face.  On many occasions they were threatened with dire consequences. There are instances of families accepting permanent family planning methods being boycotted and made to flee the village. Continuous systematic effort by the Boat Clinic health teams and family planning counsellors have shown results and gradually we see a change in the attitude of the very people who had once opposed it.” 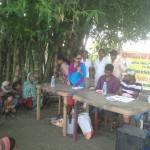 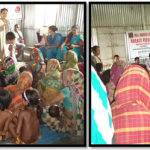 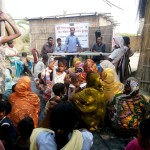 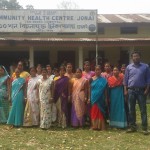 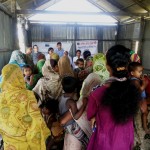 Awareness session on Family Planning by BC 1, Barpeta at Barghul Char under Nagoan PHC. 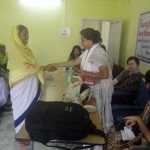 Dr SewaliDevi, JDH congratulating an Asha for her being declared the best performer in family planning. 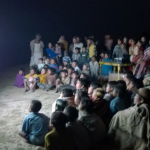 Screening of documentary on family planning at Kankurmukh, Jorhat 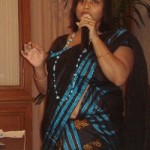 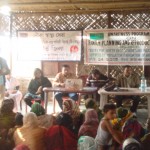 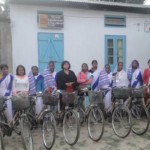 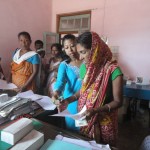 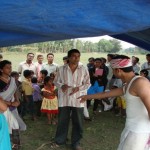 The street play on family planning being performed 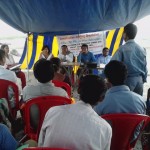