Home News You Can Use Marooned in the Red River

Marooned in the Red River 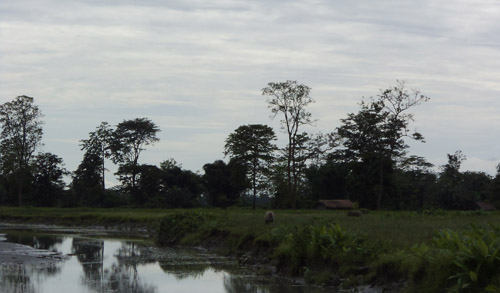 “It was raining incessantly. Every wave that shook the boat made us nervous. We could not sleep, infact we heard about a woman getting drowned a while ago. We put on our life jackets, but would that suffice? Our food and drinking water was nearly over. One night the boat was massively shaken by a powerful wave, I, for a moment felt that death has us in its clutches… I thought of talking to my family for the last time… ” Dr Ritesh Kalwar, Medical Officer Boat Clinic, Tinsukia

Hands stretch out, waving frantically. Eager eyes follow the speck in the overcast sky; hear the slight drone get louder and finally sight the helicopter’s rotating blades moving around in slow circles. Poor visibility makes it another wasted search effort. Stranded in a boat in the midst of the mighty river, the team spends another sleepless night onboard even as the boat swings helplessly  to and fro buffeted by strong waves. With the Brahmaputra in full spate and floods ravaging Assam yet again, the * Tinsukia Boat Clinic SB “Swaminathan” named after its donor, prominent editor -economist, Swaminathan S Aiyar, covering the eastern most fringes of the nation with basic health services, for most the first times ever in their lives, was marooned for six days.  A dairy from the stranded health team:

SB Swaminathan starts journey upstream from Guijan Ghat in Tinsukia for a seven day routine health camp to Amarpur sapori (river island) near Sadiya, inhabited predominantly by the Misings- a plains tribe who live along the Brahmaputra. Amarpur comprising 30 villages, is one the most difficult islands in terms of access. It is a 14 to 16 hour ride from Guijan ghat to Amarpur via Dhola, a small riverine town, where a night halt is normally taken, with the boat docked at Dhola ghat.

Next morning the team proceeds to Amarpur from Dhola, traveling north and joining the Dibang, one of the main channels of the Brahmaputra. As always, the mood was jovial onboard- the young 12 member team (including two pregnant nurses) cracked jokes, sang Bollywood hits, played cards, a few enjoyed the view from the deck. The boat was docked at Teliabari ghat at 12:40 pm.  It was a pleasant, windy day in a picturesque sapori dotted with lush green fields; the clear waters of the Dibang formed the backdrop. The camps were held near the boat under tents. Mothers with children, pregnant women and the sick gradually filled up the camps for their checkups and immunizations. After a long, tiring day, the team finally retired at 7:00 pm, halting the night at Moinapara ghat. Problems started soon after with a sudden downpour which carried on the whole night, with the same intensity.

“As we sat around a camp fire enjoying evening tea, the wind grew stronger. We could see dark storm clouds in the horizon, quickly packed up and went inside the safety of the boat. The rain started soon after followed by thunder. The mighty Brahmaputra started taking a different form.  The boat crew was alert.” Dr Debarshi Paul,MO, Boat Clinic, Tinsukia.

Rains continued. The river changed overnight, it was no longer friendly. The tractor normally hired by the team from the bank to reach camps at Madhupur and Chilling four kms inside had to be diverted through a much longer route. The village was water logged. Donning raincoats and umbrellas the team attended to nearly 300 patients finally ending camps at 6pm. Medicines and camp essentials were loaded on the tractor trailer and the team started return journey to the boat.   It was not easy to negotiate the tractor even for the experienced driver, Jishu Doley through slush and rapidly rising flood water, more than 5 feet at places. It skidded off track at least four times till they finally managed to reach the boat. The Dibang was at its full spate now- swelling and inundating nearby villages one by one, as the helpless team watched from the boat. Life jackets were put on. Emergency SOS calls were made to the mainland. There was fear of the boat being hit and damaged by uprooted trees and logs which were being carried swiftly with the force of the current. The night was long, a nightmare almost, as the boat 65 X 15 ft was tossed around like a paper boat by strong currents dashing against the hull. The team huddled together in the central (lobby) area, praying. Each thought of their near and dear ones back home, doubts creeping now whether they would be able to return home at all. Would this be their last night?

Morning dawned, the team was thankful that they were together, alive and unharmed. There was little respite however. Water level was rising alarmingly; the crew informed the team that navigation downstream could be dangerous; the better option would be to take the boat to a safer site, protecting it from collision with floating logs. Scheduled camps were cancelled, ASHA workers of respective villages informed. The end line survey for the family planning project supported by the PFI (Population Foundation of India) conducted by field investigators at Amarpur were asked to stall work for a while. There was desperate call for rescue. Food stock and water supply was in short supply. The District Project Officer (DPO), Tinsukia Boat clinic Arup Saikia who was not onboard, informed the district administration and NRHM about the need for swift action. The Deputy Commissioner and ADC suggested helicopter evacuation, which could however not be done immediately due to bad weather. The team did see the helicopter moving around in the vicinity, tried to draw attention but failed.  It was another sleepless night.

The rain stopped. Water from the banks receded by a foot overnight. The team was a little relaxed. They looked all around them from the deck- it was just water and water everywhere. They saw villagers flocking towards the flooded banks with fishing nets and baskets and observed – saw how skillfully they spread their nets to ensure a good catch. The doctors saw villagers searching for something in the submerged bushes. Seeing the curious faces, a small boy from the group showed them what was inside the bag that he had so painstakingly gathered along with family- live jumping crickets! “Sir, takom” he said smiling offering a few to the amazed doctors who politely refused. It took them no time to understand what ‘takom’ meant  in the  local dialect and that it was a  delicacy.

“With such difficult living conditions this is how villagers somehow survive- adapting to their surrounding the best way possible”   Konwar Pegu, the local Community worker

Towards evening, it started to rain and water level rose. In Tinsukia and Dibrugarh, water was flowing above danger level. The team was beginning to feel the stress, of not being able to come out of this dangerous situation.

Rescue efforts were on. The Programme Manager, C-NES from the regional office at Guwahati reached Tinsukia and along with the DPO met the district officials. He was informed that inspite of best efforts, Air Force choppers could not locate the team. The ever supportive Deputy Commissioner assured them that next day, the team would be rescued by any means.

Meanwhile at the boat..

Life carried on ….. the team tried their best to keep spirits high, to still smile together, bonded by the strong camaraderie they shared.  Most were dehydrated as drinking water was over. Thankfully the generator still worked and there was enough fuel to keep it going for another 2 days. The phones could be recharged. The laboratory technician tried to dig a pit in a visible plot of land to get sediment free water as the river water was brackish with silt, The water was boiled and used. Few of them waded through waist high water to reach the nearest village and brought food and drinking water from tube wells. Dr Paul caught fungal infection (tenia) while wading through muddy unhygienic water in search of food and drinking water. A member from the boat crew found a leech stuck in his recently wounded foot. The doctors applied medication and dressed it up. Nurses Kaushalya Tanti, GNM and Rupali Dutta, ANM were pregnant. There was little else they could do but pray. Says the seven months pregnant Rupali  “One morning I could not feel the (baby’s) movement and panicked. I was already shaky after the tractor ride. I prayed to the mighty son of Brahma, offered him tamul pan (betel nut and leaf) and coins for the sake of my unborn child. The Medical Officer reassured me that all was ok after a checkup. ”

Even in the midst of so much turmoil, the team continued providing medical services to people who came to the Boat Clinic in small country boats for all days they were marooned. About 35- 40 people were given treatment. The villagers in turn brought food stuff for the team they were so fond of. The Boat Clinic was their friend, ever reliable.

“Small children with their mothers gathered near our boat. The little ones were coughing and sneezing. They looked lethargic. We immediately understood we had work to do and started a camp over. A wooden plank was lowered onto the flooded bank and the people climbed up to our boat. We examined the patients and then distributed medicines. They returned happily leaving behind gifts- fresh fish for us to relish” Dr Debarshi Paul

The team was asked to be ready by 1 pm for evacuation. There were happy faces onboard. Feeble sunrays peeping through the overcast sky predicted a better day. The phone calls came in- first from the Circle Officer, Doomdooma followed by the Air Force Wing Commander wanting to know the exact location of the Boat. As the team had no GPS, they were asked to wear their bright orange life-jackets, stand in a row and hang a jacket on a long pole, for easy sighting. Moving in slow circles, the chopper approached them, at last, gradually lowering height with deafening noise of the blades. The team waved, this time in reciprocation. The pilot tactfully landed on the only dry patch available. The pregnant nurses boarded first, followed by the rest of the team.  The boat crew stayed behind .They would sail back to Dhola Ghat helped by the National Disaster Response Force (NDRF). The team bid goodbye and wished the boat crew a safe journey. At 1.28 pm, the helicopter took off with the team to Mohanbari airport at Dibrugarh, a 20 minute flight. This was one happy team.

“As we flew above our boat, we silently thanked it for saving us from the wrath of nature. We realized that it would have been dangerous to sail back. All we could see from above was flood and submerged villages. People had deserted their homes and shifted to dry land wherever available. We thanked the Pilot, the crew members, the district administration and the C-NES members led Managing Trustee Sanjoy Hazarika for safely bringing us back to mainland. We will work with renewed zeal- for we are cared for too! ” Dr Debarshi Paul

(* The health team is a part of the Centre for NE Studies and Policy Research (C-NES) – National Rural Health Mission (NRHM) Boat Clinic health outreach initiative that provides basic health services to the marginalized river island communities of the Brahmaputra, most of whom come to the health camps just to “see” how a doctor looks like, for they have not seen one until the Boat Clinic intervention in 13 districts across Assam)