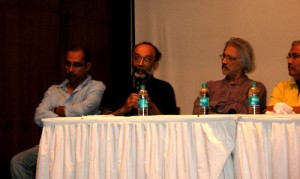 Sanjoy Hazarika responds to a question from the audience as Maulee Senapati (on his left, director of A Measure of impunity), Patwardhan and Barua listen

Noted film maker and activist Anant Patwardhan has called for the repeal of the Armed Forcers Special Powers Act and said that the widespread attitude of ‘my country, right or wrong’ needed to change.

Mr. Patwardhan, who is well-known for his espousal of human rights and critique of communal forces, was launching the C-NES report on the Impact of Conflict on Women to an attentive and packed hall on October 15 at the National Centre for Performing Arts in Mumbai, in the presence of noted film director Jahnu Barua and prominent media specialists and human rights campaigners. 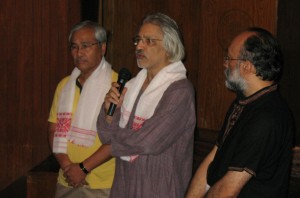 Describing the report and the film, A Measure of Impunity, directed by Maulee Senapati as well as an exhibition of photographs on the theme by Kausiki Sarma as ‘disturbing, powerful and moving,’ Mr. Patwardhan said that other parts of India like Mumbai needed to better understand the concerns of people in the North-east as well as the rights situation. He appreciated the effort by C-NES to bring these issues to the attention of the interested public and called for better sustained exchanges and information on the challenges before the region. 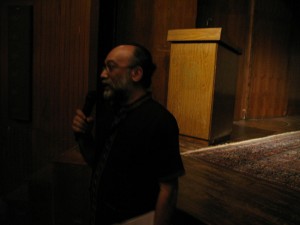 Sanjoy Hazarika speaks to the audience

Calling Mr. Patwardhan one of his closest friends and associates, Mr. Jahnu Barua, who chaired the panel discussion after the screening of the film, stressed the need to develop “the right attitude” without which problems such as those existing in the North-east could not be resolved.  He emphasized that it was as much the responsibility of involved citizenry as much as governments to enable these changes to take place.

The panel, which included Ms. Meenakshi Ganguly, director for South Asia for Human Rights Watch, Ms. Rupa Chinai, independent writer, Mr. Sanjoy Hazarika, Managing Trustee of C-NES, film director Maulee Senapati and researcher Mizra Zulfikar Rahman, drew lively responses, comments and questions from an attentive audience which got a rare opportunity to hear and see a different face of the North-east than what was familiar with shallow and sporadic media coverage. 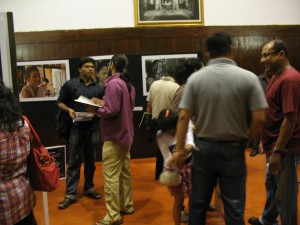 “When I look at the condition of human rights in South Asia, it is the situation in the North-east which fills me with the greatest sense of depression,” said Ms. Ganguly, adding that those who stood for certain beliefs were determined to reject any other viewpoint.  In addition, there was a “collective sense of silence” in the rest of the country, especially the media, over the complexity of issues there.

Sanjoy Hazarika, referring to the project and the programme, said that the effort was to enable other parts of the country to get a more nuanced understanding through this “small effort” of the region and its people but also to look at what needed to be done to deal with the trauma of women, in particular, who were the most vulnerable in areas of extended conflict.  “We need counseling centres in areas of conflict – why should such trauma be unaddressed for decades and then passed on to the next generations?”

During the discussions on both days, members of the audience wanted to know what they  could do to enable better understanding and shared ideas and proposals.  One said he was driving to Nagaland to take part in the famous Hornbill Festival in December and invited others to join: “we have to be better informed but also inform others through our interest and the fact that it is such an interesting and safe place”; others questioned the demand to remove the AFSPSA saying that strong laws were necessary to retain control, a point strongly repudiated by panelists.

“Why have special laws, doesn’t it mean that you don’t trust others, that you see them as special people who need special treatment? You don’t need such laws, you need trust and access to justice,” remarked Mr. Hazarika.

There was widespread applause for members of the audience who said they wanted to extensively use the film and other documents in schools and educational institutions such as TISS in Mumbai to ‘spread knowledge, information and interest.’

The programme now moves to Guwahati on Oct. 23 before ending at Kohima on Oct 28-29, having traveled to Delhi, Kolkata, Chennai and Mumbai.