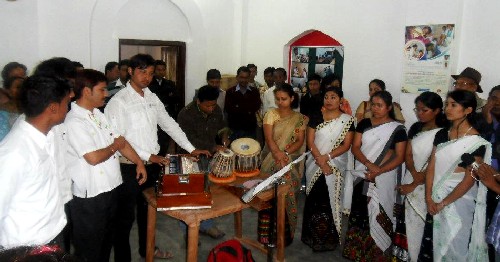 A new radio station — Brahmaputra Community Radio Station (BCRS), on the banks of the Brahmaputra – is being set up by C-NES in collaboration with UNICEF, Assam at Maijan ghat, Dibrugarh as part of an effort to democratized mass media, with reporters and writers from communities of the area. Community radio across the world is popularly defined as a “radio for the people, of the people and by the people”.

A BCRS stakeholders meeting was organized on November 30th, 2011 at the BSRS office , Dibrugarh .The meeting which was originally planned to mark inauguration of BCRS and its introduction to scholars, intelligentsia, professionals, business sector, media and government circles of Dibrugarh was quickly converted into a moving memorial meeting and stakeholders discussion, to remember the brilliant contributions of cultural genius and icon Dr Bhupen Hazarika and writer-thinker Jyanpith awardee , Dr Indira Goswami, popularly known as Mamoni Raisom who had expired only the previous day, attended by Unicef Chief Field Office, Assam, Ms Jeroo Master, eminent writer- columnist Sanjoy Hazarika, the Managing Trustee C-NES, academics, members from the local community and BCRS management committee members. 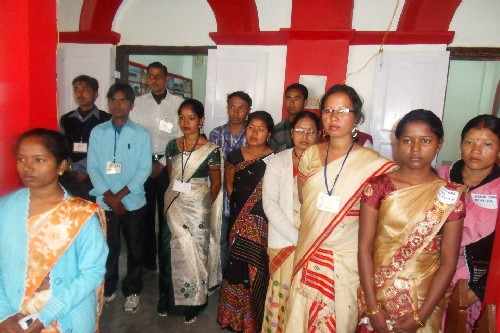 The freshly recruited group of commmunity reporters, talented and energetic, all set to bring a change in their respective locations

By the banks of the river, the hall of the CRS at Maijan Ghat reverberated to the beat of the Dr Bhupen Hazarika’s immortal ‘Xagor Xongomot’ sung by a local talented group after Ms Meena Teli, President Zila Parishad ,Sanjoy Hazarika, Jeroo Master, prominent local entrepreneur Ratan Saikia lighting lamps and all stood in silent prayer to honour the great figures of Assam.

The radio station will benefit the communities of the river islands as well as the tea tribe communities inhabiting the river banks and will function as extended arms of dissemination of national flagship programmes such as NRHM, Sarba Shiksha Abhiyan and Total Sanitation campaign. The local communities would be involved in reporting on issues like education, health, culture, sports and entertainment and other issues of interest to them, reflecting the lives of those it reaches. The station will reach out to over 2 lakh people within a 15-20 km radius and will be broadcasting in five languages- Assamese, Bhojpuri, Bodo, Mising and Shadri (tea tribe dialect). There are 15 young radio reporters recruited from these five communities and a network of 150 volunteers spread across islands tea gardens and urban areas. “This is the first such radio station where programmes will be broadcasted in five languages. The reporters have been shaping extremely well- an amazingly talented group, they are good singers, have sharp responses and are energetic and positive.” said BCRS programme coordinator, Bhaskar Jyoti Bhuyan The station will be launched as full broadcast service sometime in latter half of 2012. Right now they are doing ‘narrow casting’, gathering programme feedback from the community listeners. 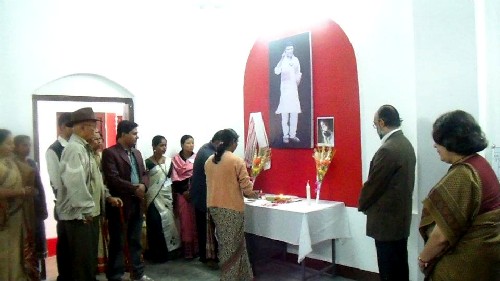 At the community radio station Dibrugarh, a silent prayer for Dr Bhupen Hazarika

C-nes, which was established in 2000, works on a range of issues at both field and policy levels relating to health education and other areas of governance. These include participative planning and rights, water resources, environment, rural livelihoods, peace building and building better understanding among communities. The organization designs and develops innovative ideas for implementation to reach the poor and marginalized groups specifically in areas of health, education, energy and environment, conducts workshops and training programs, reviews government policies and projects. C-nes believes that both at grass root and policy making levels, individuals and communities can make a difference if they develop a stake in their own governance and the community radio station is expected to be a significant milestone in that direction.